The technological revolution of the last 10 years has ushered in new communications infrastructure which has redrawn geographic borders and time lines for global commerce. Almost the whole planet is inside a system of technologies capable of reducing geographical distances between citizens and, in the context of trade, between companies and consumers.

The advent of the digital economy has changed human relations, allowing a speed in long-distance communication that is now comparable to physical proximity. The natural consequence of a revolution of this magnitude has been the transformation of all other types of relationships, political, cultural and commercial. The latter, in particular, have been overwhelmed by the introduction of new infrastructure that has eliminated geographical distances in the sale of goods and services.

In this context, the issue of Cross-Border Trade has become a central element to business strategies. Every company can access potentially suitable infrastructure to promote the sale of its products on a global market, and on the flip side, every consumer is able to buy goods and services from anywhere in the world with just one click. 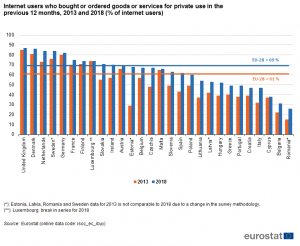 A recent report from Eurostat has shown an ideal situation for European and global e-commerce. In the UK, for example, 86% of Internet users shop online. The percentage is 84% in Sweden and 82% in Germany. In Italy, the percentage is around 43%, compared to the European average of 68%.

A more careful analysis, tells us that some markets like the United States, Britain and Australia prefer to make purchases from local retailers or from the big giants of online sales (like Amazon). Contrary to those finding, the Eastern European market shows no hesitation in buying from foreign e-commerce portals. This is what emerges from one study conducted by Paypalon global buying habits.

According to the respondents’ answers, the choice to buy products from local online shopping sites is mainly due to language.

On several occasions, we have referred to the article written a few months ago about the role that Linguistic identity plays in the conquest of foreign markets, and the research conducted by Paypal partially confirms our thesis. Analysing the data from the infographics above and below, it appears that, overall, an important part of the world population does not feel safe buying products on portals and foreign websites where they cannot use their own language.

One of the peculiarities of a market that would like to be defined as transnational is its geographic extension without borders. At present, however, the e-commerce sector is confronted with a large share of consumers who purchase exclusively from national platforms and distributors. To be

precise, there are two main purchasing channels: national and large global platforms such as Amazon or eBay.

In both cases, there is a difficulty for companies in conquering transnational markets directly through their own channel and brand. Without a doubt, there are a variety of factors that make the process of digital globalisation of companies difficult. There are still customs restrictions, geographical, economic and political variables, but one of the causes is also traceable to the language management of a company’s e-commerce that is not oriented towards global customers.

According to the 2019 Idealo report, only 8% of digital stores in Italy present their e-shop in a second language other than Italian. Spanish and British e-commerce lead the way with 24% of portals in two languages, followed by Germany at 12% and by France at 10%.

Once the strategic importance of multilingual management of e-commerce has been defined, there are two ways that a company can achieve the goal of transnational sales. The first is to translate all the pages of the site into different languages, depending on the target national markets. For example, if the goal is to sell products in Latin America and Europe, 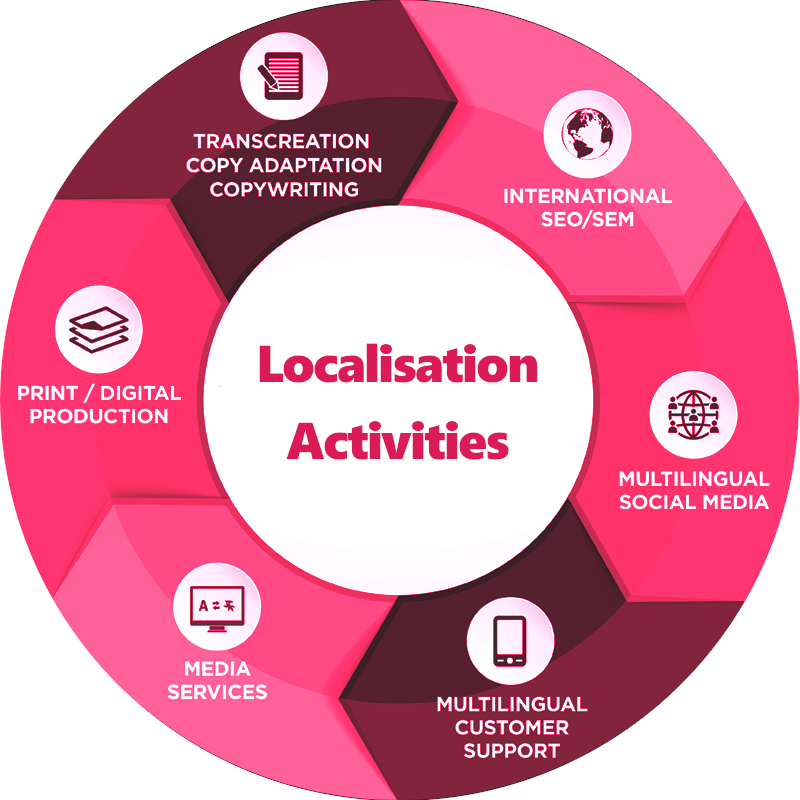 the consequence will be to translate each page of your site into Spanish, Portuguese PT and Brazilian Portuguese, English, French, German, Italian and Russian.

Once the target languages have been defined, relying on professional translation agencies such as Intrawelt facilitates subsequent steps and reduces project management times. In fact, in addition to the translation of all the website pages, the most structured and professional agencies are able to deal independently with all the content management, from translation to online publication.

A second option, while more complex, but certainly more effective, goes beyond simply translating each individual page and includes the localisation of the content for each country. With the term localisation, we mean the creation of a website from the ground up, a site with content that has been created independently for each country, using the local language and therefore identifying communication with the customs and culture of local consumers. This requires a higher quality of work in the development of texts and content suitable for the local language, with a great advantage in terms of effectiveness.

The linguistic service agencies that offer localisation services , in fact, go beyond simply translating the text produced. They also offer linguistic advice in choosing the actual content. In this way, local consumers are not visiting a foreign website translated into their language, but will find a portal in which they will recognise common elements with their linguistic and cultural identity, strengthening the relationship of trust that still persists between the retailer and consumer.

We use cookies to help us provide our services. By using our services, you are accepting the use of cookies.

We may request cookies to be set on your device. We use cookies to let us know when you visit our websites, how you interact with us, to enrich your user experience, and to customize your relationship with our website.

Click on the different category headings to find out more. You can also change some of your preferences. Note that blocking some types of cookies may impact your experience on our websites and the services we are able to offer.

These cookies are strictly necessary to provide you with services available through our website and to use some of its features.

Because these cookies are strictly necessary to deliver the website, you cannot refuse them without impacting how our site functions. You can block or delete them by changing your browser settings and force blocking all cookies on this website.

We also use different external services like Google Webfonts, Google Maps and external Video providers. Since these providers may collect personal data like your IP address we allow you to block them here. Please be aware that this might heavily reduce the functionality and appearance of our site. Changes will take effect once you reload the page.