What is the first thing that comes to mind when we think about Hispanic Americans? Illegal immigration, a wall along the Mexican border and images of poverty and repression are often at the forefront. Is this really an accurate picture? In reality, the situation is far, far more complex.

In the collective imagination, Hispanic Americans are viewed from an economic perspective as relatively poor with low life expectations and this is partly why they have never been a significant target for the financial-services market.

Hispanic Americans currently represent 17% of the US population, many voted for Trump and the group shows greatly reduced unemployment rates. Whilst these facts alone may appear surprising, more detailed analysis reveals an even more interesting picture.

According to a 2017 study by Univision Communications and Harris Poll, entitled Banking on Hispanics for Growth, out of 59 million Hispanic Americans living in the US, 16 million are between the age of 18 and 34 years, with an average age of just 29. Considering a life expectancy of 82 years, the Hispanic American community boasts an average 53-year window of active eligibility for the purchase of financial products, against 43 years for non-Hispanic citizens.

This figure assumes even greater relevance considering that today there are still relatively few Hispanic Americans using financial goods and products, despite the fact that 80% of them (source: Simmons 2017) declare that they are interested in making purchases, with a peak of 84% among those who speak mainly or exclusively Spanish. 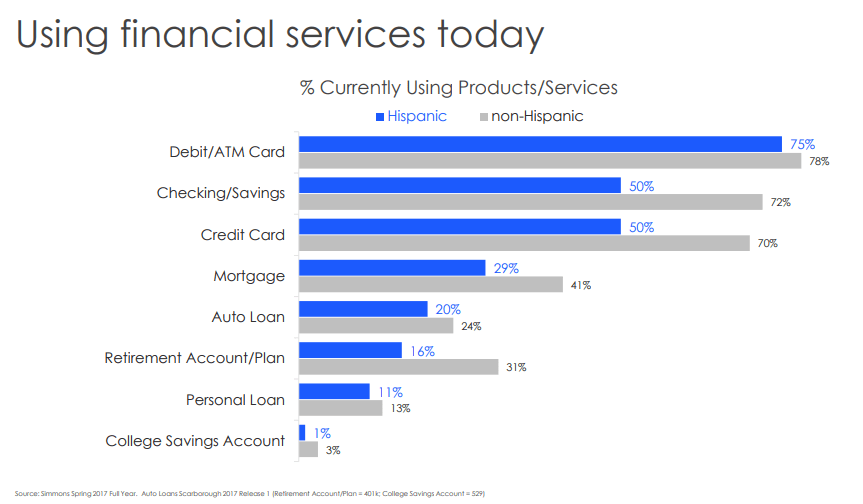 In American society, certain populations, such as the Hispanic population, are showing themselves to be more active than others in pursuit of personal and professional goals aimed at improving their quality of life. It is this generational force which makes Hispanic Americans a target market with potential to be explored, particularly with regard to financial services.

Like Mediterranean populations, Hispanic Americans place great importance on their identity and social institutions: language, family and relationships. The study conducted by Univision and Harris Poll revealed that according to the perception of the Hispanic population, 51% of them felt poorly valued by the financial-services market, while 69% maintained that the products on offer did not meet their needs and 22% felt extremely unsatisfied. 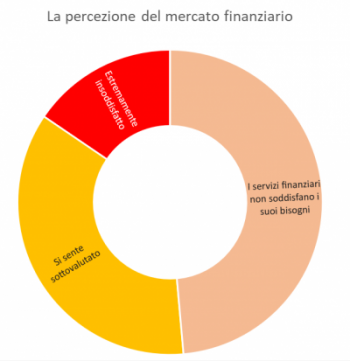 One finding was particularly surprising: only 29% of Hispanic Americans stated that taxes and interest rates on services were a primary obstacle (against 44% of non-Hispanics). Finding the key to gaining their trust as clients could offer huge rewards.

Engagement with their identity: the role of translation services

To win over a population, you must win over their hearts and their identity. Communication is the best way to do this, and words and language are the most effective tools.
88% of Hispanic Americans give complete loyalty to those companies which demonstrate themselves as an active partner and invest in supporting the community.

The winning solution is to trust in a translation and interpreting services company such as Intrawelt that has been working in the sector of financial translations for over thirty years offering multilingual communication services, and translation of financial statements and marketing campaigns in over 30 different languages.
Not only translation but also interpreting. The key strategy is to have an interpreter specialised in financial services supporting business liaisons and dialogue with local communities; a kind of right-hand man with detailed knowledge of customs and cultural norms who also possesses financial-services know-how.

Establishing itself as a trusted top player in an identity-focused market such as that of Hispanic Americans requires a high degree of knowledge and sharing of customs, social norms and language. It is fundamental to know how to speak to stakeholders, communities, banks and local companies.
This is why Intrawelt exclusively uses native-speaker professionals specialised in a variety of different sectors including financial, medical/scientific, legal, technical and marketing.

There is an untapped market in the land of the stars and stripes. The race to win over the hearts of Hispanic Americans has begun and today our services can make the difference in the financial marketplace.

For further information, write to us at info@intrawelt.com .

Want to join the discussion?
Feel free to contribute!

How to choose a Translation Partner (part 2)

We use cookies to help us provide our services. By using our services, you are accepting the use of cookies.

We may request cookies to be set on your device. We use cookies to let us know when you visit our websites, how you interact with us, to enrich your user experience, and to customize your relationship with our website.

Click on the different category headings to find out more. You can also change some of your preferences. Note that blocking some types of cookies may impact your experience on our websites and the services we are able to offer.

These cookies are strictly necessary to provide you with services available through our website and to use some of its features.

Because these cookies are strictly necessary to deliver the website, you cannot refuse them without impacting how our site functions. You can block or delete them by changing your browser settings and force blocking all cookies on this website.

We also use different external services like Google Webfonts, Google Maps and external Video providers. Since these providers may collect personal data like your IP address we allow you to block them here. Please be aware that this might heavily reduce the functionality and appearance of our site. Changes will take effect once you reload the page.